The history of Putteridge Bury can be traced back to Edward the Confessor’s time when a tax of 3½d (2p) was paid daily to Hiz (Hitchin) for the land of about 100 acres.

By 1086, when the Domesday book came into being, Putteridge possessed sufficient woodland to support 40 hogs whilst the manor of Lilley, nearly 20 time

In its early days Putteridge Bury passed through numerous hands. A new manor house was built in 1556 by Thomas Docwra, which restored in the nineteenth century, still survives today as the Farm House.

In 1788, the manors of Lilley, Putteridge and Horwellbury were sold to John Sowerby Esquire a wealthy merchant of Hatton Garden. The silver lion from his crest can still be seen on many Lilley cottages.

In 1808 a serious fire destroyed the entire mansion and most of the furnishings, but in 1812 the mansion of Putteridge was rebuilt, in Regency style, half a mile north of Thomas Docwra’s old manor house (on present site).

The clock Tower made in 1841 by Gatwards of Hitchin, stands on the old stables and indicates that the previous house was built further south than the present house. The Sowerbys were renowned naturalists and horticulturalists and it was early that century that the grounds were laid out in their present form.

In 1868 the estates passed to George Sowerby. He is pictured above with his wife Emily.

A tragic event happened in 1888 when he was killed by an Egyptian stag in Putteridge Park (a copy of the report of the inquest in the Luton Times and Bedfordshire Advertiser, 10 August 1888 – can be seen at Putteridge Bury).

The house was acquired in 1908 by a brewer, Thomas Meadows Clutterbuck, who rented and lived in Chequers from 1898 to 1909. The old house was pulled down and the mansion at Putteridge Bury was built in the style of Chequers by architects Sir Ernst George and Alfred Yates costing £30,000 according to newspaper report. The new mansion was completed in 1911. 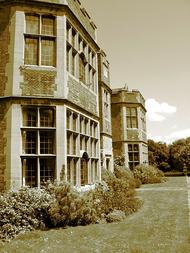 The grounds were redesigned by Edwin L Lutyens, soon to be recognised as the foremost architect of the era, and planted by Gertrude Jekyll, one of the finest lady Victorian gardeners. Important features are the reflecting pool and the massive yew hedges. The mansion was leased to Sir Felix Cassel QC in 1921 and then sold to him in 1928 for £10,358.

Sir Felix married Lady Helen Grimston, daughter of the third Earl of Verulam, in 1908 and had five children; James, Hermione, Francis, Harold and Josephine who married Dr Griffin Pugh – the doctor on the Everest expedition.

Queen Mary and King George V often visited Putteridge Bury with the Prince of Wales and on 1 December 1926 the king planted an oak tree in the lawn to the south of the house. During World War II the house was requisitioned by the government for use by the armed forces.

Senior officials lived in the house and Nissen huts were erected in the grounds for the soldiers. Later on prisoners of war were housed in the Nissen huts. Mr Werner Enge, a German by birth was briefly a prisoner of war, and decided to stay on in Luton after the war ended.

He became a Senior Lecturer in Welding at Luton college of Education from 1966 to 1989, also studying at Putteridge Bury for the Certificate of Education in 1986. On learning the story of how Colonel Sowerby was killed he agreed to create a life-sized sculpture of an Egyptian stag, which can be seen in the house, to commemorate the tragic event.

After the death of Sir Felix in 1953 the manor was severed from Lilley and Putteridge Bury was acquired in 1954 by the textiles company British Celanese Ltd who converted it for use as research laboratories, until 1962.

In 1965 it was acquired by Luton Borough Council and opened as Putteridge Bury College of Education in 1966. Following Government cutbacks in the mid 1970s Putteridge Bury ended its brief life as a teacher training centre and was merged with Luton Technical College to become the Luton College of Higher Education, in September 1978.

From 1985 the function rooms were gradually renovated to their original splendour and to conference centre standards while the unused gymnasium was converted into a learning resources centre.

A vast number of delegates and guests visit the Conference Centre for sales and training conferences, meetings, weddings and social events. It is also licensed to perform civil marriage ceremonies.